Tanzania is one of the finest bird-watching destinations in Africa, with 1140 species including 200 migrants and 74 marine birds present. Tanzanian birding safaris are best in the rains for migrants and residents in breeding plumage. The preeminent birding locations include Arusha National Park, with 400 birds in a diversity of habitats contained in a small area. You may observe on a white-faced whistling duck, with its whistling three-note lament, or a dusky flycatcher. Tawny eagles and buzzards hover above Ngurdoto Crater, whilst the Momella Lakes is the place for water birds and waders. Lake Manyara National Park offers pink flamingos, pelicans, storks, cormorants, hornbills, and many more with over 400 recorded species. Greater and lesser flamingos are also found in Ngorongoro Crater and millions mass on their breeding ground at Lake Natron. Tarangire’s swamps are home to over 550 species, with weighty kori bustards, ostriches, secretary bird’s and helmeted guinea fowls on the drier plains, where weavers and lovebirds are also common. A Serengeti 500 birding species safari reveals endemic Fischer’s lovebird, a bright-hued small parrot also found in Ngorongoro Conservation Area, grey crowned crane, and the brown snake eagle. Buff-crested bustards and spike-heeled larks nest on the plains below Mount Kilimanjaro, best known for Abbot’s starlings with white bellies and purple capes, alpine hill chats, and scarlet-tufted malachite sun birds, whilst lammergeyer haunt its upper slopes. A bird-watching trip to the southern parks with Kiwoito Africa Safaris overlaps the ranges of both southern and eastern species. With over 440 recorded listings for the vast Selous Game Reserve, the Rufiji and the Great Ruaha Rivers provides ideal habitats for mangrove kingfishers, yellow-billed stork, malachite kingfishers, African skimmers, and palm-nut vultures.

Here we showcase a few of the more commonly seen birds in the park. The Yellow necked spurfowl (Pternistis leucoscepus; also known as the yellow-necked francolin) is one of the more audible birds of Tarangire and seems to take sadistic pleasure in sitting outside your tent at dawn and letting forth a piercing, scratchy, and never-ending the call. Although it might not look like it this bird, which is widespread throughout much of East Africa, is a member of the pheasant family. The Northern white-crowned shrike (Eurocephalus rueppelli or white-rumped shrike) is an insect eater that can often be seen perched on branches or the backs of large mammals scanning the ground for insects. The shrike builds a cup-like nest out of spider webs and grass and it’s thought that it might be a cooperative breeder, which means that babies are brought up not just by the parents but by additional group members. An acacia tree festooned in intricately sewn weaver bird nests is one of the classic images of East Africa. There are numerous species of the weaver in Africa (they’re also found in parts of Asia) including the red-billed quelea, which is thought to be the most numerous wild bird on Earth. Weavers are best known though for their incredible nests, which in the case of many weavers are woven together from grasses and, in the case of some species including the black-necked weaver (Ploceus nigricollis) shown here, is a conical shaped nest with a long, downward-facing entrance tunnel. The white-face whistling duck (Dendrocygna viduata) is a common, noisy, and gregarious species that at times can occur in huge flocks. Its distribution patterns are interesting because it’s found only in eastern and southern Africa and South America though as yet nobody is sure how it managed to originally travel from one to the other (a helping human hand has been suggested). The red-billed hornbill (Tockus Ruaha) is frequently encountered in Tarangire and though a reasonably big bird (around 42cm in length) it’s one of the smaller hornbills (and lacks the obvious casque atop its bill that many other hornbills have). They nest in holes in trees and after the female is installed on the nest, the pair seal up the hole using mud, fruit pulp, and droppings, which helps predator proof the nest. They leave just enough of a hole for the male to be able to pass food into his mate and the young birds. As the chicks grow, and the space becomes tighter, the female breaks out, and then they reseal the hole and continue to feed the chicks through the small gap. The diminutive and very pretty Pygmy falcon (Polihierax semitorquatus) is, at just 19-20cm in length the smallest raptor on the continent. It’s so dainty that it lives inside the abandoned nests of white-headed buffalo weavers. One of its favorite foods is small birds though it leaves the weavers it lives among alone. Common throughout eastern and southern Africa near larger bodies of water, the African marsh harrier (Circus granivorous) is the smallest of all the marsh harriers. Although classed as Least Concern by the IUCN the species is thought to be in decline thanks to the loss and destruction of its wetland habitat. The large, striking, and common woodland kingfisher (Halcyon senegalensis) is found throughout much of sub-Saharan Africa. In Tanzania, it’s a permanent resident, but populations in the northern and southern limits of the bird range migrate to and from central and eastern Africa with the rains. They can be aggressively territorial and have even been known to attack humans! The black-headed heron (Ardea melanocephala) is a large bird that can stand up to 85cm and have a wingspan of a meter and a half. It’s normally found close to water where it remains statue-still until a fish, frog, or some other suitable snack swims past at which point the heron stabs its prey at lightning speeds with its sharp beak. With its distinctive coloration and large crest of feathers on its head, the hoopoe (Upupa epops) is an unmistakable bird. It’s perhaps for this reason that hoopoes feature in so many legends, religious texts, folklore, and superstitions throughout much of its African and European range. The hoopoe was considered sacred in Ancient Egypt and is depicted on the walls of Egyptian temples, it was a hoopoe that was said to have brought news of the Queen of Sheba to King Solomon and it was a hoopoe that Islamic tradition says saved Moses and the children of Israel from being crushed by a giant Og (don’t ask us for a photo or description of one of these though!) after they’d crossed the Red Sea. In much of Europe, hoopoes are considered the bearers of bad luck and be thieves, in Scandinavia, they bring war with them and in Estonia they foretell death, but in ancient Persia, they were considered a symbol of virtue and in Ancient Greece, they were thought of as the King of birds. The large and attractive yellow-billed stork (Mycteria ibis) is common along the riverbanks and ponds of Tarangire where they hunt for fish by moving their feet rapidly in the silty bottom mud to disturb any hiding fish or crustaceans, which they snap up in one fast swipe of their bill. The bright and bold Lilac-breasted roller (Coracias caudatus) is an unmistakable bird commonly seen perched on tree stumps and branches. It feeds on insects, scorpions, lizards, and even snails. When nesting the pair will aggressively defend their nest against much larger creatures (including people). It’s the national bird of Kenya. As its name suggests the open-bill stork (Anastomus lamellicorns) has a very distinctive bill that doesn’t appear to close properly. They use this bill to help them pry open the shellfish they feed on. In Tarangire, they roost in huge numbers in one or two dead trees on the edge of the swamps. 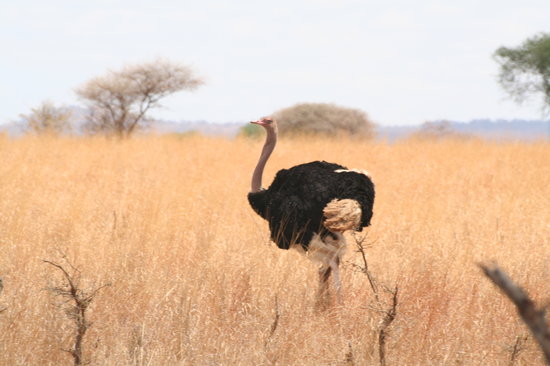 Everybody knows what an ostrich (Struthio camelus) looks like and in Tarangire visitors will get to see lots of them. Huge and very powerful, ostriches are the largest living birds. They can weigh up to 145kg and males can be anywhere from 2.10 meters to 2.60 meters tall. Flightless they can though run at speeds of up to 70km/h, which makes them the world’s fastest two-legged animal. They can be aggressive and they have a kick and a peck powerful enough to break bones. They lay the largest eggs of all birds. Contrary to popular belief they don’t bury their head in the sand when frightened. In this picture, the ostrich is taking a sand bath to remove dead skin and ticks, and other insects. Arguably the most beautifully colored of all the birds in Tarangire National Park, the superb starling (Lamprotornis superbus) is a favorite with all safari-goers on account of a coat of colors that would make Joesph and His Amazing Technicolour Dream Coat jealous. It’s also a very curious and intelligent bird that shows little fear of humans. In some areas (though not at Oliver’s Camp where we discourage such behavior) it can become so tame that it will sit at the edge of a table picking off crumbs of food you might drop.